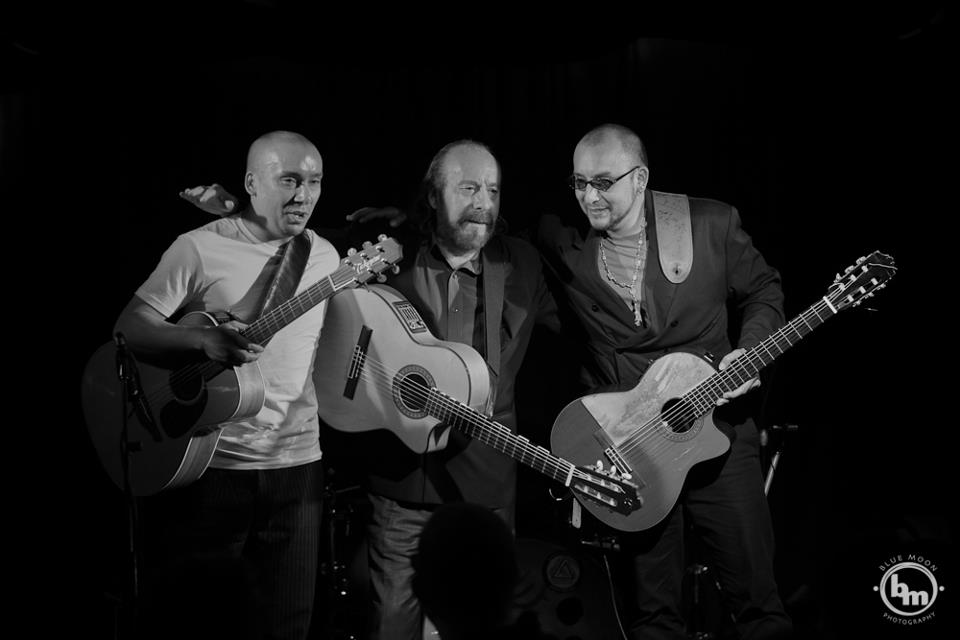 Chilean-born, Victor Martinez Parada is recognised as one of the world’s finest classical Latin-American avant-garde solo guitarists. An accomplished performer, composer and teacher, he has an extensive list of music in his repertoire, ranging from classical to modern to South American folk to avant-garde. He has composed pieces for solo guitar, ensembles including duos, trios, quartets, sextets and also for guitar & ensemble and guitar quartet & symphony orchestra.

With his sons, Andro and Dauno Martinez, he led the family guitar trio, Martinez Akustica who performed professionally from 1997 until 2012 throughout Australia and internationally. All three members played six string acoustic and electric guitar, bass and also used their instruments as percussion and vocal beat box. One minute they played in unison, the next in harmony, then across and against each other. It was calm then chaotic, beautiful then forceful. It was difficult to fully describe them until you’d heard them. Their interplay and understanding that flowed through them was inspiring, endearing and infectious. They truly captivated their audience as they stretched each other’s ability with a flourish here and an astonishing variation there. These incredible players were on the must-see list for anyone who played a guitar, anyone who aspired to playing guitar and anyone who enjoyed listening to guitar.

Each of the members now have individual careers. Victor Martinez Parada continues to perform nationally and internationally as a soloist. Martinez Akustica perform occasionally by special request.

Martinez Akustica also had a strong representation in the corporate world including clients such as communications Giant Telstra, Red Carpet Movie Premieres, The Mo Awards, Australian of the Year Awards, events for Yamaha Musical Instruments, Australian Federal Labour Party and The Australian Prime Minister and many more.

Represented Australia in the 2005 World Expo in Aichi, Japan.

In April/May of 2008 Martinez Akustica went on a very successful promotional tour to Tokyo, Japan performing to rapt audiences with 27 shows. Because of the huge response to the tour, in November of 2008 the trio went on a follow up national tour of Japan this time performing in Tokyo, Osaka, Kobe and Nagoya. The trio was extremely well received and performed at one of Japan’s most prestigious venues ‘The Bottom Line’ Nagoya, featured in national radio in Nagoya and Osaka with interviews and Martinez Akustica was added to their playlist. Together with the help of Austrade in Osaka and promoters throughout the rest of Japan, Martinez Akustica secured a strong future in one of the world’s biggest music markets. Because of the success of this tour, Martinez Akustica was asked to perform in April of 2009 throughout Japan. Victor Martinez Parada was approached by guitar manufacturing giant, Yairi Guitars, to develop the customised Victor Martinez Model. In July/August 2009 Martinez Akustica returned to Japan for a series of showcases resulting in Japanese distribution and release of their records through Buffalo Records.

... Martinez had an interesting approach to JAZZ and POP, highly energetic jazz laced with flamenco flair and modern improvisation by three Great Guitarist...

... Their live show left me inspired each night of the tour. Definitely some of the most talented musicians I have ever seen...

... The music benefits from their intensity and passion.... so does the listener!

The band has an endearing, inspiring and infectious energy and it shows in their performance

The Gypsy Kings are happy. It has been incredible playing with the musicians Martinez Akustica. Our concert has been a great success in Sydney. We hope to play together next time in another place on Earth.